The Sesame is filled with various nutrition 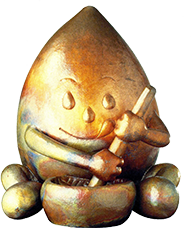 From ancient time, the Sesame believed has a lot kind of nutrition not only Sesamin and recently it has been scientifically improved

The Sesame contains full of Fat, Protein, Carbohydrate・Vitamin・ Mineral・Vegetable Fiber which are essential for us. Its nutritional value is very high among vegetable food. We, Wadaman sincerely recommend you to take 2 big spoonful Sesame everyday which contain calcium contained in a cup of milk, protein contained one third of Tofu, Iron contain 100grm of spinach, and Vegetable Fiber included 70grms of Fresh Seaweed.
It’s rather recommendable to take Ground Sesame and Sesame Paste for better nutrition absorption.